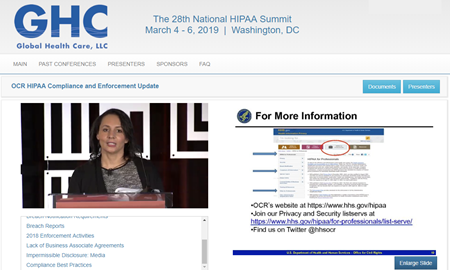 We come bearing news from the 2019 HIPAA Summit, today.  Officially, it was The 28th Annual National HIPAA Summit.  The event happened in March from Washington, DC.  Thankfully, they have offered a webcast option along with onsite attendance for years.  I sat in on the HIPAA Summit sessions again via webcast and there is much to share.

Many people ask me why I attend these kinds of events if HIPAA is what I do, why do I need it.  I learn something every single time.  That is why.  It is amazing how many things you may not have thought about are discussed in sessions.  Also, you get to hear directly from the people who are making decisions and setting direction.  For our businesses, we follow what OCR directions tell us.  We do not try to make interpretations or get creative with how it applies.  Our approach is “here is what the law says how you address that is your business decision”.  It always seems safer to refer to law and guidance first.  My opinions of the law and guidance mean nothing when someone asks if we are following regulations or not.

Here are my notes from various sessions of the three-day event.  I attempted to group them but sometimes they all overlap each other in different views of the same content it was easier to just talk big picture sometimes.

Director Severino kicked off the HIPAA Summit with his keynote address.  He hit on a lot of familiar topics but did add some new points to make note of for the rest of us.  Other members of the OCR staff spoke on different topics including enforcement information and plans for 2019.  There was a consistent theme mentioned repeatedly which relates to the patient right of access.  We do a deep dive into that topic next week.

Patient rights of access to medical records is a hot topic.

OCR is launching a 2019 enforcement initiative due to the continued problem.

The next phase of the random audit process will be enforcement-based not compliance-based audits as has been done in the past.  We still haven’t heard any enforcement settlements that came from the previous round of audits.  But, last year they strongly implied that some of the audited organizations had been turned over for investigations based on what they found.

Speaking of settlements there were several tips mentioned in covering their banner year for enforcement actions.  For example, many of the settlements we have heard about in the past involved entities that ignored the initial requests from OCR or did not take them seriously.  OCR made it very clear that ignoring them does not move you to the bottom of the pile.  It will move you faster to the top of the pile.

I have never had any problems working with the folks at OCR.  They want to make sure patient rights are protected.  It isn’t about being mean to someone.  They are concerned that those of us with access to highly confidential data treat it properly.  I respect them for doing their job and do my best to advise my clients to provide exactly what is requested.  It is more clear that you are trying to do the right thing if you show that during an audit or investigation.

A few specific points that were shared come from cases that you know these things happened.  You don’t just make them up.  I know I don’t have to do it and none of these sound like something I would be shocked to hear actually happened.

Of all the specifics they shared about recent settlements I found the Advanced Care Hospitalists settlement was one I kept saying wow over and over as they explained it.  The breach happened when billing got behind and office mgr said: “I’ve got a guy”.  The guy was using software that wasn’t his to do billing and giving her a kick-back.  Since the software wasn’t properly used, the “guy” exposed all of their data on the public internet.  No real security in place at all.

In February 2014, one of their hospitals notified Advanced Care that they had patient information viewable on the billing company website.  By the end of the breach investigation, 8,855 patients had their data exposed.  When OCR came knocking they were not happy with what they found.  This company had no HIPAA program at all.  None, nada, zip.

Apparently, they believed that all they needed for HIPAA was handled by the doctors being trained at the hospital.  They didn’t need any of that other pesky stuff like BAAs and security concerns.  The $500K and 2 year CAP were evidence that OCR isn’t totally vengeful.  They clearly could have taken everything they wanted to get out of them and didn’t put them out of business.

Cybersecurity at the HIPAA Summit

As expected, they covered the newly released Health Industry Cybersecurity Practices: Managing Threats and Protecting Patients (HICP) that we covered a few weeks ago.  There were several points I thought were helpful to understand how to use it and why they elected to use some of the methods they included.

First, I found it interesting that they made a specific point about which guide to use (Small, Medium, Large).  If your security stance in place right now sucks wind then use the small even if you aren’t small.  Using the small one at least gets things done that you should be able to implement quickly.  Once you get those addressed then do the Medium.  Once there look to see if any Large parts fit you.

As we discussed in our episode, they used the flu concept for explaining some of the information in the general guide.  They explained that they did that because they actually ran tests of different methods of explaining these things to clinicians and the flu example really worked in those tests.  As we already know, they do understand that if I don’t get a flu shot and now I get the flu I am now a threat to others.  In fact, I should be disconnected from everyone else until I am over the infections.

They did bring it up several times that this guide is not specifically related to HIPAA.  There is some concern people will use this as a checklist for HIPAA security which it is absolutely not supposed to be done.  We agree and are trying to spread the word.

Other points I noted that were covered in the security sessions include:

Your HIPAA security program should be risk-based not compliance-based.

As humans, we make things more complex.  Started with paths, then roads, then cobblestone, then tar, and it keeps moving along to highways and interstates.  Building and maintaining these things keep getting harder as they get bigger and more complex.  If no one walked down a path it didn’t get maintained.  If you turn on a state highway you expect it to not be a mud path with two tracks.

Don’t expect Federal Privacy law this year or next.  After 2020, at least that is what most of those lawyers.

FHIR is becoming a thing.

Whew, that is a lot of information.  Imagine soaking all of the discussions in over the three day period.  I always enjoy what I learn.  It is a great time to take a step back and look at the big picture.  It is also great to hear how things are going with others out in this part of the healthcare behemoth.  I will be back online (or maybe in person) next year.